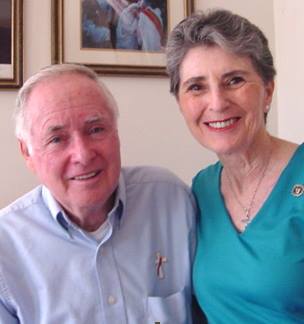 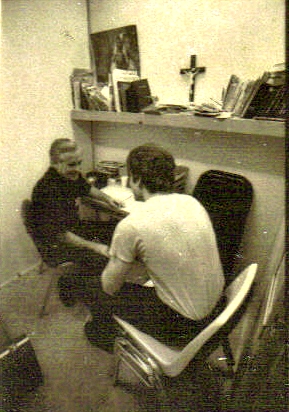 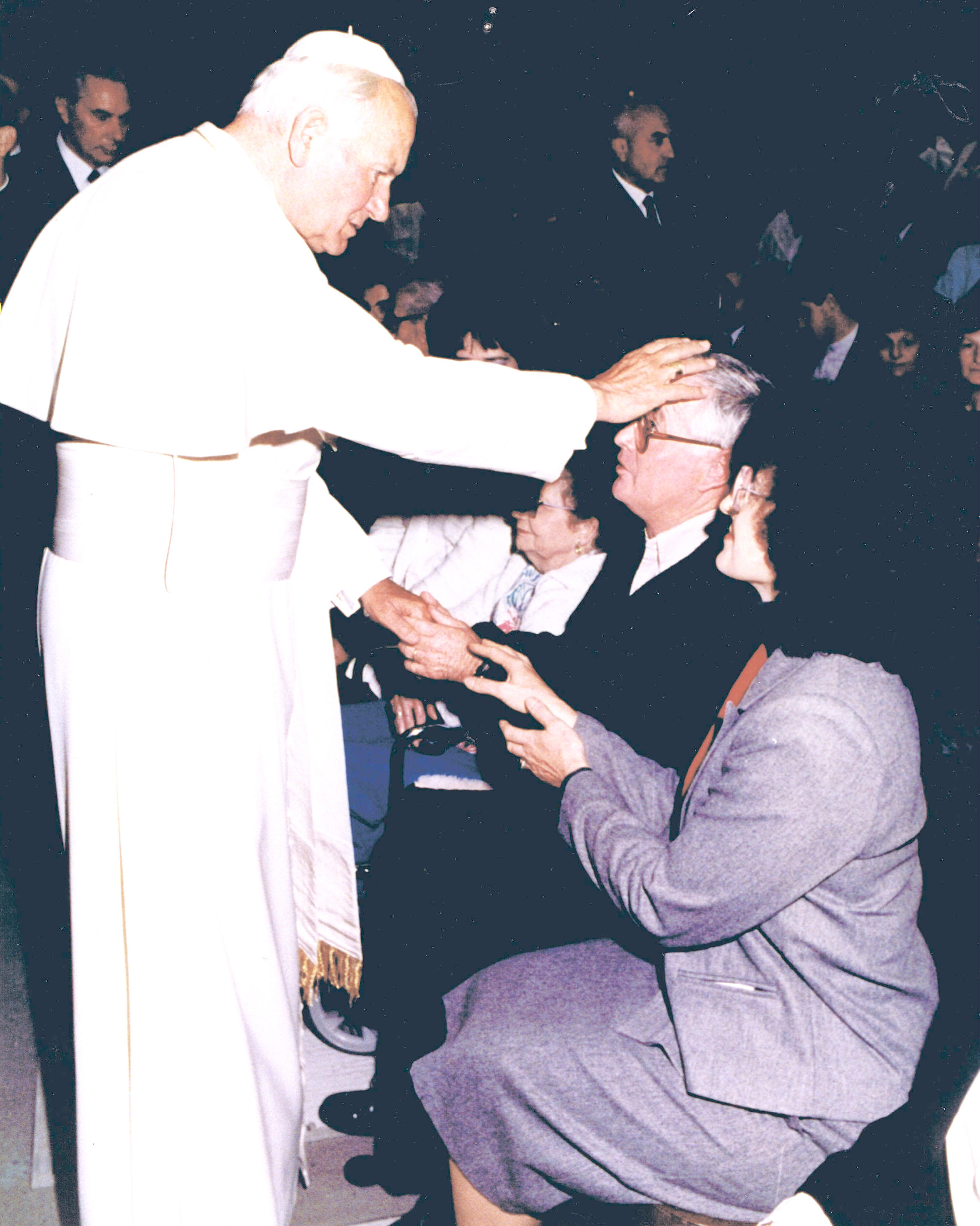 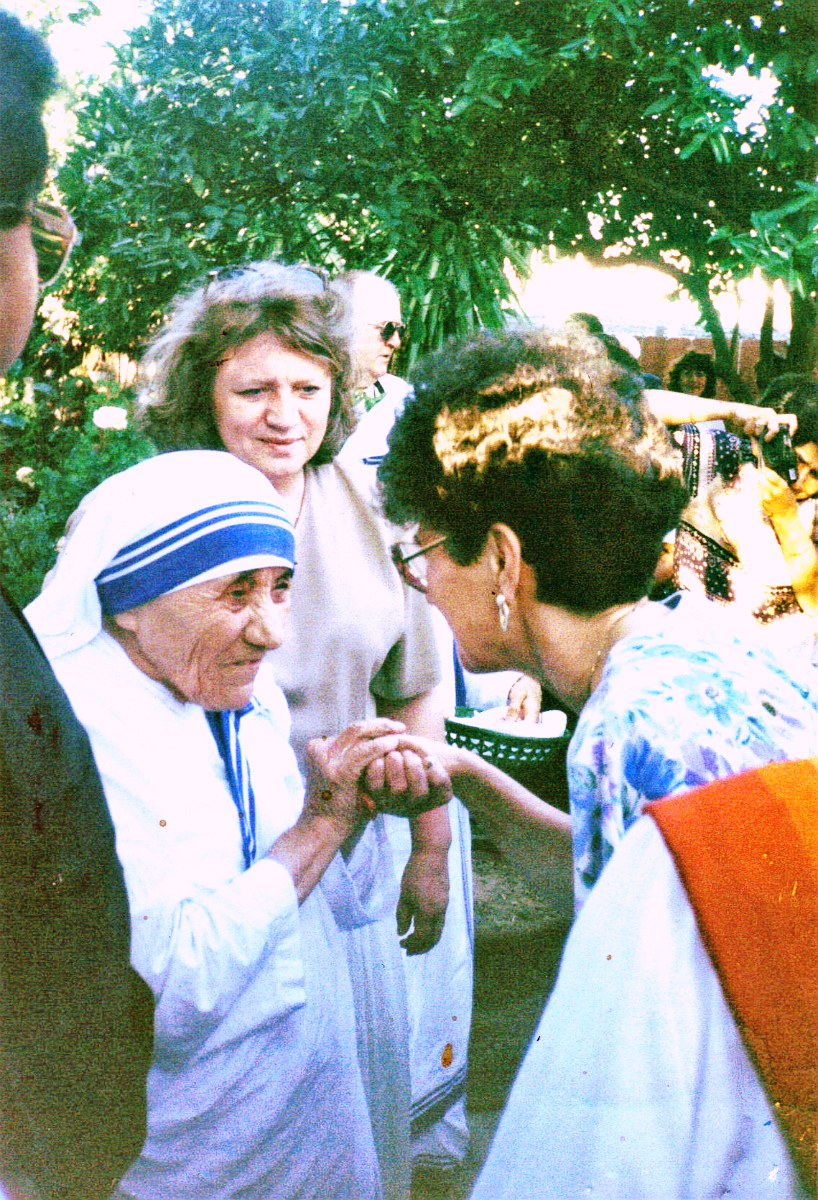 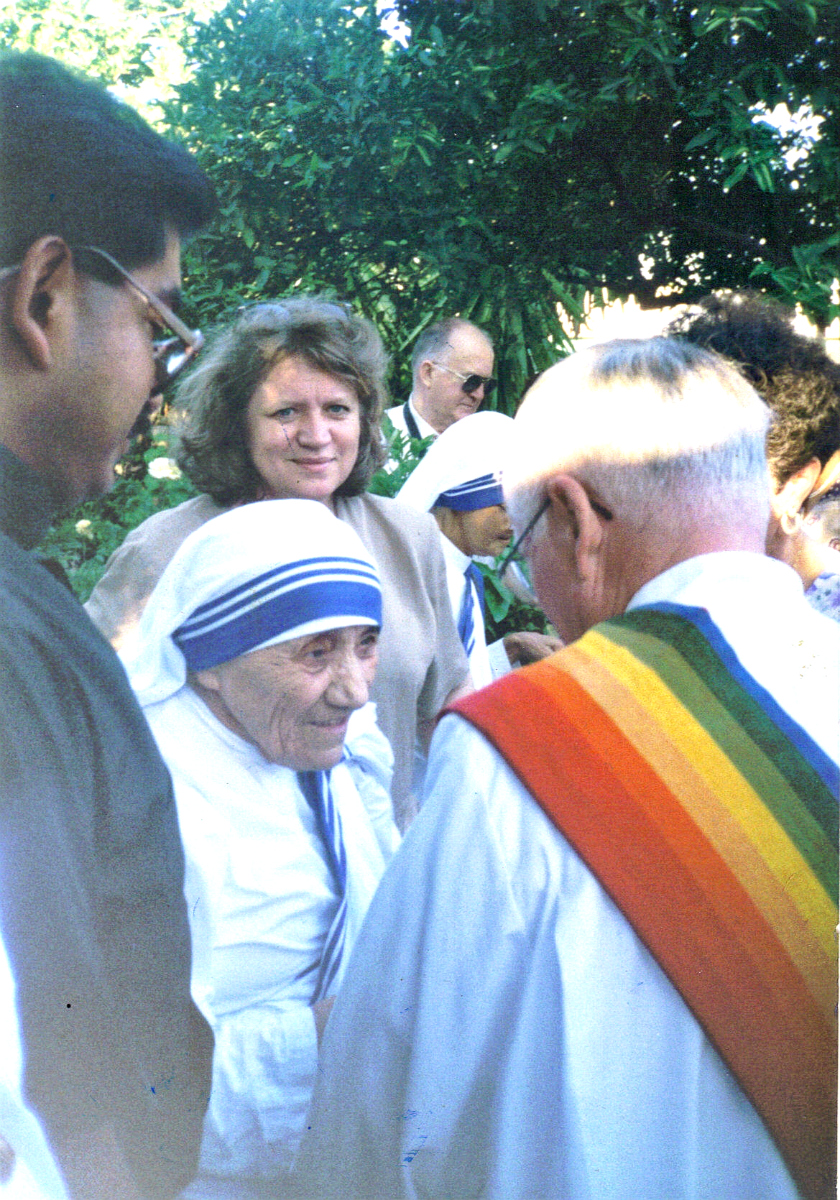 Deacon Ken Finn became a Catholic deacon in 1978 and a few years later began work as a prison chaplain counseling inmates at a rate of 100 to 150 a month. Deacon Ken said, “I try to tell the person they’re not a piece of junk or garbage… Christ loved the sinner… I have never met a person in my life who does not want to be loved.”

Through this work, Deacon Ken developed a passion for prisoners and saw a need for a Bible Study that could be distributed free of charge to those in prison. Inspired by Saint Teresa of Calcutta, Deacon Ken and his wife, Marie began St. Dismas Guild in 1989 and shortly after started writing a Catholic Bible Study that follows the Churches Liturgical Cycle and distributing it to Mother Teresa and her sisters around the world for feedback.  The Bread of Life Catholic Bible Study was completed in 1992 with the Blessing of Pope Saint John Paul II and the imprimatur. It is now published in both English and Spanish.

St. Dismas Guild is a Catholic non-profit organization whose mission is to bring Jesus Christ, the Word of God, to the broken, the lost and the lonely, the sick and the imprisoned. The objective of St. Dismas Guild is to prepare, transcribe, publish and distribute teaching aids and commentaries on Holy Scripture and to go out and search for the broken, the lost, the lonely, the hurting, the addict, and the sick and bring them into a personal relationship with Jesus Christ and continued growth by the power of the Holy Spirit through Sacred Scripture, Church Teaching, and the Sacraments. Deacon Ken & Marie have led many Life in the Spirit Seminars, Marriage Seminars, Strong Women of God and Strong Men of God Seminars over the years.

On February 7th, 2014 Deacon Ken went home to be with our Lord. He is tremendously missed by his wife and all in St. Dismas Guild pray for his intercession so the Guild may continue its mission.

St. Dismas Guild continues to grow and currently distributes the Bread of Life Catholic Bible Study along with other Catholic publications to over 135 prisoners (we average about 73 new inmates requesting materials) every month, at no cost to the prisoners, and we serve over 850 facilities. In addition to providing books to the prisoners, St. Dismas Guild distributes a monthly newsletter containing testimonies to a mailing list of over 4,700. The printed testimonies are just a sample of the numerous letters the Guild receives from those who have experienced healing through the word of God and their personal relationship with Jesus Christ.

One success story is from Frank. His story began at 14 years of age…alcohol and drugs gave way to heroin and cocaine which brought him to his knees. His journey continued for 20 years. He had overdosed a few times, tried many inpatient secular programs and ended up in jail in a cell with someone charged with murdering a 16 year old girl. This was not the life he wanted, but it had such a stranglehold on him. It was Deacon Ken and Marie, who both provided spiritual support. Frank grew up Catholic, and believed in God but never really gave it much thought. For the first month, he thought he was going to die going through drug withdrawal cold turkey. He started reading the bible and said that everything in it pertained to today’s life. It had all the answers…he was totally amazed. Frank has been clean for 25 years and can’t stop thanking God. Here is a quote from Frank, “It’s such a blessing knowing that I can call out to Him at any time and He will fulfill all my needs. Can you imagine having someone to take all your problems away. It’s just a matter of opening up and letting Him in. When Christ comes into your life there will be nothing you can’t achieve.”

Donations to help us send free resources to prisoners
or those who cannot afford them
may be made out to:
St. Dismas Guild, PO Box 2129, Escondido CA 92033

Prepare for the upcoming Sunday’s Mass (FOURTH SUNDAY IN ORDINARY TIME (Jan. 29th) ‑ CYCLE A, “Happy are the poor in spirit.” by printing and completing The Bread of Life Catholic Bible Study. This is a #liturgical Bible Study written by Deacon Ken and Marie Finn the founders of our Prison Ministry. It follows the Sunday readings with questions and commentary to help prepare for Mass. Individual Lessons are available for Download.…… View and print the lessons here:stdismasguild.org/fourth-sunday-in-ordinary-time-jan-29th-cycle-a/…… To Purchase a Bread of Life Catholic Bible Study workbook - Cycle A, send an Email to stdismasguild@yahoo.com or Call our office @ 760-466-7001. Leave us your name and address and we will get your Order out, with an Invoice, to you right away. We ask for a Suggested Donation of $20 per workbook plus $5 Shipping Cost.You may pay by sending a check to our P.O. Box or leave a donation on our website under the donation tab. …… #BibleStudies #CatholicBibleStudy #breadoflifebiblestudy#biblestudy #catholicfaith #catholic #christianity #biblestudylesson #spirituality #faith #FaithfulToTheBay ... See MoreSee Less